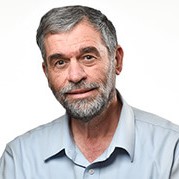 Prof. Haim Azhari was born in Jerusalem, Israel in 1955. He received his B.Sc in Mechanical Eng. from the Technion in 1977, his M.Sc. (Cum Laude) in Biomedical Eng. from Tel-Aviv University 1984, and his D.Sc. in Biomedical Eng. from The Technion in 1987. From 1987 to 1990 he was on the staff of the Technion Department of Biomedical Engineering in a postdoctoral position. Prof. Azhari then received a double appointment as an International Research Fellow in both the Department of Radiology and the Division of Cardiology at the Johns Hopkins School of Medicine in Baltimore Maryland USA, and was in the USA from 1990 to 1992. On his return in 1992 he was appointed Senior Lecturer in the Department of Biomedical Engineering Technion-IIT. From 1999-2000 he was on a Sabbatical leave at Harvard Medical School at Beth-Israel radiology department at Boston Massachusetts.