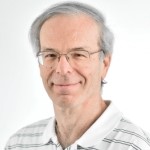 Ron M. Roth (Fellow, IEEE) received the B.Sc. degree in computer engineering, the M.Sc. degree in electrical engineering, and the D.Sc. degree in computer science from Technion—Israel Institute of Technology, Haifa, Israel, in 1980, 1984, and 1988, respectively. Since 1988, he has been with the Computer Science Department, Technion, where he currently holds the General Yaakov Dori Chair in Engineering. During the academic years 1989–1991, he was a Visiting Scientist with the IBM Research Division, Almaden Research Center, San Jose, CA, USA, and during 1996–1997, 2004–2005, and 2011–2012, he was on sabbatical leave at Hewlett–Packard Laboratories, Palo Alto, CA, USA. He is the author of the book Introduction to Coding Theory (Cambridge University Press, 2006). His research interests include coding theory, information theory, and their application to the theory of complexity. He was an Associate Editor for coding theory in the IEEE Transactions on Information Theory from 1998 till 2001, and he is now serving as an Associate Editor for SIAM Journal on Discrete Mathematics.